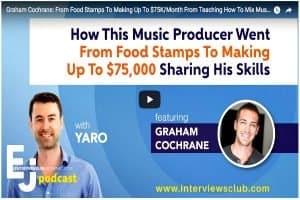 This was double good news for me!

Yaro has built a life by showing people how to make a living with just their laptop and phone.

He’s one of the first people who ever clued me into turning a blog into a business.

I’ve been following him for something like ten years now. He was just a kid, really, when I first found him. But even then, he was interesting enough to hold my attention.

And I love listening to Yaro Starak now, more than ever

His teachings, I feel are invaluable. And he is very pleasant to listen to. His tone of voice, mannerisms, and warmth come through clear as day on all he produces.

If you want some sort of online world that looks like mine, then start following Yaro.

Then came this Graham Cochrane bit

Turns out Graham has a very similar business building background and process as mine.

This gave me great peace.

When I heard what he was up against as he built out his (unexpectedly) large empire, and his key marketing approach, which was just to produce massive amounts of content until someone tripped over him…well…it was such a relief!

Because that’s all the glamorous that my approach has been.

And I’m only right now inching above the same economic limitations Graham faced as he did it.

But he’s proof that my plan has worked for someone else. Staggering proof, actually.

Graham made about $5g his first year, then $60G the next.

Some of you following me also have something to share.

I love being the proof that you can do it.

But I need reassurances too. And I got that from Yaro’s latest interview. Listen to it. Learn from it. Be inspired by it.

Now start building your own thing.

I got nothing for podcast episodes this time around.

All my efforts went into designing the new Human Design section of Outsiders Journey.

That’s that “thing” I was mentioning in the last newsletter! Dig into it. Chew on it. Then go get your own report done if it feels right.