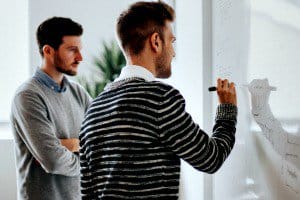 A mentor’s job is to:

Having been guilty of the following myself, allow me to explain.

Too many people hire a mentor in the hopes that some magical trick or secret will be revealed that will take them to the next level.

Surely, some tactics, strategies, and systems can seem miracle-like if they’re that new to you but the hard work remains.

Just knowing these things is not enough.

Doing them is what matters

A nuclear bomb has more power than anything else on the face of the Earth. But as long as it’s just sitting there, it’s just an expensive paperweight.

It serves no purpose until it is used. Placed into action.

Start simple. Decide with your mentor what the most important task is to move you forward and begin that task.

Chunk it out like that. Don’t get overwhelmed by tackling the entire project.

Plan a strategy with your mentor and then come to agreement over what would serve you best to start first.

You simply repeat this step until all your foundational pieces are completed. Then you begin on alignment, integration, and tactical movement.

But your mentor, no matter how awesome, well-versed, intelligent, or deep thinking is not going to be of any use to you if you don’t put in the work.

Now you need to investigate working smart and not hard

There is a key distinction to be made here in the form of ROI (Return on Investment).

You will always work hard.

But smart people get more work done in the same amount of time and with less effort.

I added this piece to give you hope.

Because the ability to get greater returns on your efforts translates into your being able to take more time off to do the non-business things you’d rather be doing.

In the beginning of any endeavor, you’ll likely not have anything you need or at least not everything you’d wish you had. It’s going to be a struggle.

If there is any magic to a mentor’s work, it is that, right there.

Starting makes other things happen in your favor.

The photographer of this post’s featured photo: Mantas Hesthaven