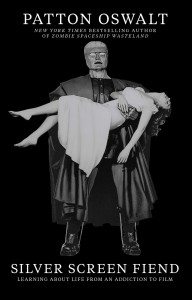 It’s frequently the oddballs, outliers, outcasts, and lunatics that we should be paying attention to the most.

They’re on to something, or at least working on it

Should they survive the trial that is their life, they’ll often emerge with wisdom of the highest caliber, profoundly useful to those still in the fight.

Or they’ll use all their negatives as fuel for their metamorphosis into something entirely new.

And if the most tortured among us can pull this off, what’s it mean for you?

Your pain–your trials–are messages from your subconscious in response to your daily choices; collectively and in the immediate.

Every day, you’re quietly leading yourself toward, or away from, a life worth having.

Patton Oswalt made this fact crystal clear in his book, “Silver Screen Fiend: Learning About Life from an Addiction to Film”.

And I very much wanted to know how a guy who faced similar struggles went on to become the great success that he has.

Becoming a comedian is not for the faint of heart. It takes guts. Paradoxically, it draws some of the most fear-filled people to its stage.

Patton has his demons. They’re with him every day. He just doesn’t let them dictate the overall quality of his life or his ability to support those he cares for most.

He also developed a perspective from merging his fears and desires that made all the pain and self sabotage meaningful.

He reformatted his horrors into things of beauty

I did that to the best of my abilities at the time in “It Takes Guts To Be Me”.

And I’m attempting to do the same inside the pages of this site. And to varying degrees, with everyone I cross paths with in my day.

There is something to be gained from ever single interaction with another person.

The knowledge gained may not always be desired.

Other times, it can be earth-shatteringly perfect for your needs and has the potential to entirely change the course of your life.

Never know until you both put yourself out there and also become a student of people. And a student of yourself.

But for many of us, it’s not enough to just learn and grow

I’m that. Those. Them up there.

And I get better at it all by learning from warped souls like Patton.

He makes me laugh til I piss blood. Then I wonder why.

That wondering leads me to some profoundly interesting territories.