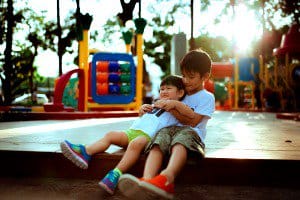 Everybody should have the kind of friends that Marines are to each other.

I had just sent a copy of my book to one of my lifelong best friends from the Marines, Ernie.

We made a great team!

He had called to say he got the book and wanted to do a little catching up with me.

Two hours later, when I hung up, I had more insight into both myself and him as people.

We’ve both undergone massive change for the better, based in managing some damn painful life moments.

Dug into some deep topics. Too scary for Oprah even.

We shared our troubles and our triumphs as only two best friends can. It really was moving for me.

But I was also charged! Amped!

He had reminded me of yet more tales of mayhem I was part of (and the rest of the guys), that I had completely spaced.

Seems my whole shop came within seconds of severely beating a Gunny who very much had it coming. The whole shop!

Another friend somehow calmed us. Details are hazy.

The only clear fact is that many gallons of hard alcohol were involved.

Good thing Jimmy stepped in though. It almost happened in front of about a hundred witnesses.

We’d probably all still be in a brig somewhere. The Gunny would’ve healed but prison has a lingering quality. One point to him.

That gives you a real solid idea of how tight my shop was.

We won or lost as a team if the situation called for it.

And there were so MANY situations! Not all of them criminal in nature.

We did fine work and were proud of it, but we were always up to something in the background!

And that’s the interesting part. I share so much about my time in the Corps in my book “It Takes Guts To Be Me: How An Ex-Marine Beat Bipolarism“, and I have another large book completed on my first two years in the Corps alone (unreleased for the moment.)

Plus, I have a massive outline for the next three years, which were even more deranged and intense. And fun, we had a lot of fun!

But I still forget things that took place.

Are you starting to get the picture regarding the scope of activity level during these five years?

I’ve said it before but here it is again: “I lived big for right or wrong.”

I packed more life into five years than most do in fifty.

And I made intensely loyal friends. We’ve all gone our ways and only a handful of us stay in touch but I wouldn’t care if it was just one other guy. That one guy would mean more to me than any other friend I could have.

Some of us went to war together and some didn’t. But it doesn’t matter. We’d fight to the death for each other no matter what.

There’s only a few other groups in normal life that have that bond. And I’m sure it’s the same way for them.

For those of us who went to the Gulf together the conversation in the tent went like this:

“If a missile hits this tent we’d better ALL be killed at the same time! I can’t imagine losing even ONE of you f***ers!”

We never feared for our lives. I mean, we didn’t want to die but we feared losing someone in the group even more than losing our own lives.

For the guys who didn’t go over and had to wonder how the rest of us were doing I think Brad summed it up best:

“If something had happened to ANY of you motherf***ers over there while we were stuck back here? I’d have lost my f***ing mind!

I was not a typical Marine, but I learned something while I was still in, and it only gets clearer to me the older I get.

All those things tied into it to one degree or another but the real reason was each other.

When I reminisce it’s not about those former issues. It’s about my guys. Totally. I miss my guys.

And I’m insanely grateful for the ones I still stay current with.

Ernie, should you read this one day, great talk man!

The photographer of this post’s featured photo: Hisu lee