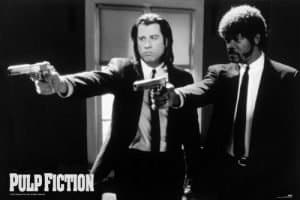 I learned one of my very most important lessons from Samuel L Jackson, he of “Pulp Fiction” fame.

Oh, I know he’s been in a hundred things before and since but Pulp Fiction’s the one that ranks above all others. (Geez, how I adore that flick!)

He was one “bad motherfucker” in that film. His wallet even said so.

Throughout that movie, he was a force of nature – cold, calculating, darkly rational, and deeply Zen about how and why folks needed to die by his hand.

Almost every movie he’s ever been in has him as a heavy of some sort. He has strong presence too. Always hollerin’. Enraged. Glaring.

A man not to be reckoned with as best we can tell.

And yet, his great position in life hangs by a strand of the weakest silk

He portrayed a crackhead in “Jungle Fever” and he did it so very well because he’d recently been an active crackhead in real life.

He’d just attained sobriety and was released from rehab one week prior to shooting.

Fast forward to the superstardom days of today.

When asked if now that he had all this power, fame, and money and could do whatever he wanted, would he consider partying again in any way, he said (and I am paraphrasing),

No. I wouldn’t. Because I know that the second I pick up that first drink or take that first hit off that joint or pipe…I am doomed. I will lose it all.

Everything I have worked so hard to attain will vanish in an instant. Because I am that guy. So, I’ll never do those things again.

See, I am that guy also

I haven’t arrived at where Samuel has landed…yet. But I have the same type of weakness as he.

And I refuse to throw away all I’ve built and gained up til now just because it’s been so many years since I last misbehaved.

How does this apply to you?

If you’re reading my blog you are probably a driven type, a creative type. Someone with too much juice, a deep thinker who rolls around inside his or her own head too much.

Someone who’s big time in touch with their emotions and can be plowed under by them. Someone who views their own mind as the friggin’ coolest playground ever.

We must not jeopardize all we’ve worked for in a moment of selfish foolishness, thinking we are somehow above our known faults, just because we’ve “arrived.”

If this is you, just know that I can help you deal with this side of your nature as we move forward in bringing your vision to life and sharing it with the world.

And thank you Samuel for providing me with such a simplistically profound piece of life directing wisdom. It caught me by surprise when I heard it and yet, I knew I’d just heard the Gospel.

His brief statement has literally kept me from straying on a few occasions over the years and I had to chuckle each time.

Like Sam was behind me, ready to punch me if I chose wrongly.