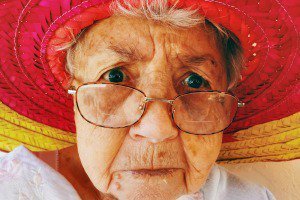 No. That’s not actually my mother.

Eye grabbing image though, no?

My poor Ma is in the hospital with an over achieving case of bronchitis.

So I paid her a visit and that made me even later on my newsletter posting than I was with last week’s.

I won’t belabor this ongoing point of mine surrounding the area of timeliness.

It’s a fucking struggle for me.

But it shouldn’t be.

I am officially adding the construction of a work flow chart to my list.

If it ain’t on the list it don’t exist

That’s the motto in my house for getting Kenny/Pops to do anything important.

It has to be on my list or I will never do it.

Because I will not think of it.

Has to be in my face.

Other noteworthy excuses for this week’s shoddy behavior:

I got entrained tonight, which has the occasional after effect of annihilating my ambition, and even my ability to remain awake and focused.

On top of that, I’m also the web guy and the I.T. guy for the office.

So after my entrainment, I had to handle some tech headaches while I was onsite.

No faxes were getting through to the computer from the fax machine and it took me an hour and a half to sort that out.

Combination of a rat’s nest tech setup and the fact that I am purely self trained in IT, producing marginal speed related abilities in trouble resolution.

It was last night that really set me back, though

I started the second podcast for my empire:

(Click the link above so that page can do the explaining of its purpose for me.)

I dug up six interviews from my public speaking days to serve as the base to the new show, and to display a “before and after” comparing the ways my recently attained wellness sounded as opposed to my current wellness levels.

Say that out loud 5 times fast!

I started launching the show around dinner time but was up til dawn completing its presentation.

Because sometimes frequently, “mostly” is as good as it needs to be to get rolling

Don’t be a perfectionist. It will kill your forward momentum.

But if timing’s tight and a deadline or some other “critical to your audience” thing needs to happen, just get it close enough and launch.

I have some tidying up to do on the AB Pod page and some cleanup left in the tangential areas for that show.

But you can listen to it now.

And forgive my terminal, recent lateness of delivery of all things Outsider.

The photographer of this post’s featured photo: Alex Harvey