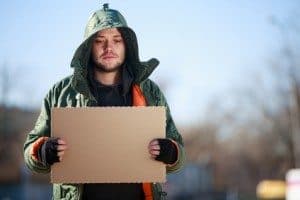 Saw one of the guys with a “homeless vet” sign panhandling for cash at the roadside of a busy intersection.

I’d seen this particular person many times before and it got me to thinking,

“Why would someone be willing to panhandle for a living?”

The main reasons are obvious. And between volunteering in a soup kitchen for two years, counseling ex-felons that same time, and working security in the ER and Psych Lockdown Ward of a major hospital for 2 years, I’d heard them all.

But this guy had a look about him. An energy floated around him that I could sense.

Made me want to speak with him. Thought that very thing more than once.

So today I parked and we chatted

I am not judging this guy. Not after the life I’ve had.

Plus, I just don’t care what his specific truth may be.

I could feel a good story brewing beneath the surface and I wanted it.

And he may be sharing it inside the Road Trip

Brent’s (sp?) sign stated that he was a Navy vet with his DD-214 on hand to prove it. I never got around to requesting that. But I got seriously curious to see why a vet would be reduced to such a position in life.

Turns out, I had it backwards.

Brent admitted to having some low level legal issues – the kind that go hand in hand with being a homeless panhandler.

And he’d endured some serious tragedies in his life, not all that long ago.

But when I asked him “why” he told me, “Truthfully? I make good money doing this. About $100 a day. It’s easier than holding a job and pays better too.”

He wasn’t being cocky or arrogant. And I could tell he wasn’t lazy. It was just too damn rewarding when compared to worker’s pay and it gave him freedom from the worker’s life.

Turns out, he had a LOT to say about careers, school, jobs and corporate mindset

Now this didn’t surprise me either. In many areas, as he talked, I found I agreed with a lot of what he was saying.

And but for a few split hairs here and there, I almost was him!

That’s when I realized why this guy had attracted my attention. I could feel his fire.

But what’s he doing with all that fire?

Well, we got deep into that as well as where he sees himself in a handful of years. What’s the Master Plan? Is there one?

Right now, Brent is pissed about a lot of things. But in his own way, he’s trying to make a statement with his lifestyle.

And that’s when I threw out the fact that he needed a better platform. I even explained how I have one for him, as long as he can somehow help another with what it is he has to say.

I shared how he could easily email his words to me and I could make him a guest poster. He wouldn’t need any money but his words would get read by more than just the people in the cars at the light.

He saw the sense in this and agreed to take a look. I have no idea if he’ll end up in these pages.

Many people say they’ll do one thing but then don’t. Human nature. Life. Shit happens.

And there’s another groovy little lesson

I’ve had many people want my help or offer theirs to me, and the ball never moved more than a few inches from there. Ever. If it got rolling at all.

And that is fine! Why?

We all need someone’s help. But desperately so? No.

That perspective leads to problems. Robs you of all your personal power from the get go.

I refuse to chase down anyone for anything. It’s pointless and harmful. And I did it for decades before coming to this realization.

Now I let the good stuff come to me. And sometimes I prod it a little like I did today with Brent.

Life is so much better for having come to this realization.

And I even discussed aspects of that with Brent. He needs to be wherever he has the highest chance of his tribe finding him.

And they’re not the people in the cars. His people are the ones punching specific keywords into Google.

They’re people already enjoying Ken’s Road Trip who’d be curious as to why I brought a Brent onboard.

Or if my people have had a past like mine, they would definitely love and maybe need to hear from a Brent as well.

His passion was huge. His intelligence palpable.

I know a guy like him would add some flavor to this site and be great for the right people, in ways that I’d never discover or be able to offer on my own.

Plus, I just dig his story.

Is he really a vet?

I know others are going to want some legitimacy out of Brent if he’s going to build his platform off the back of his veteran status. I will want it too.

If we get that far, and his words appear in my inbox, I’ll get his credentials confirmed. I’m willing to give him the benefit of the doubt until then.

Many of us are, or have been, one paycheck away from losing it all

Brent is us. One tiny wrong move or one big unplanned tragedy and we might find ourselves right next to him on a hot day, begging for money on the side of an broiling hot road, frequently dealing with people who find us disgusting.

But he has chosen this life as a type of humanitarian statement.

Nothing he said was new to me. In another life, I guarded everything that came in off the streets of a big city. I saw all frames of mind and I heard it all before.

But Brent’s smart. And he’s driven to prove his points in such a harsh fashion.

That is one of his biggest gifts to us all, if I can just get him in here.

Sure would be cool to see what a person in this situation and with Brent’s perspectives has to say about anything. My producer’s fingers are crossed!