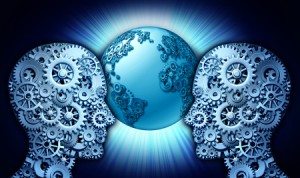 Things are starting to rev up for Mike Romano and I.

We had another incredibly deep impromptu meeting at the gym the other night.

I shared an idea that merged tech with instruction, in the most simplest of fashions. It would revolutionize the way certain gyms brought value to their customers.

He flipped out when I told him!

No one’s doing it anywhere else, at least not locally. And we both agreed that neither of us had ever seen it in use ever!

Will we use it once Mike’s gym is running? I don’t know. It might not even apply.

But it showed Mike what I was capable of. And that’s all I was really after.

I like to collect info, and other folks’ perspectives, and see if there’s a way to recombine–repurpose–that knowledge in a way that solves a problem in some other area.

Throughout my day, my antennae are up.

I am watching everything I see on two levels:

There are no new ideas under the sun

There’s very little left to invent that is totally new, excepting anything in the technology world.

The rest is the stuff people have faced for millennia, reformatted for the era, or particular situation, in which it’s occurring.

The trick is to be able to see how the reformatting works and harness it for your everyday use.

All my watchings get sucked up into the swirling mist of my ponderings, where they interact with one another and become part of an ever expanding, always present awareness that is my troubleshooting toolbox.

My job is to constantly fill my head with the perspectives and and solutions created in the minds of others, as evidenced in the various successes that make up their lives.

Then blend and serve.

I make sense of it all–give it context–by explaining how my own life has shown me that what I’m saying is true.

If I can’t understand a thing, how can I ethically or effectively share it with you?

So I keep aware of the clues. I collect. I ponder. I match what I’m thinking to what’s already happened in my life or compare it to where I wish to be next. Then make the connections. Then whip out the right tool for the right job.

Or invent a whole new system that combines tools used for different original aims for the unconventional awesome thing me or my people are trying to accomplish now.

Much of what I know how to do came from the perspective I gained as a mechanic on a slew of jobs.

Usually bored out of my skull, but being very personable and strong willed, I would eventually be placed in some sort of managerial role, too.

It gave me insight into how to run teams and how to be a better leader, by being a person who deserves to lead.

It also taught me fortitude to stick out the jobs that were horrible, while dealing with workers who felt the same way. And this also taught me how to motivate people through the different shitstorms we all face in a work day.

I learned to take on responsibility, usually for projects I couldn’t care less about, but took it as a matter of pride to get the job done and done well.

I’ve been the supply side of a project for those working on something even bigger yet. I learned how to service causes that were worth more than mine, yet were fully dependent on my ability to produce.

Sales eventually worked into the mix with different jobs I had. You had to find ways to add to the bottom line, while doing the original job that brought you to a customer in the first place.

As I grew sick of being an employee, I built or became partner in different projects where all the responsibility was on me to bring me the desired result. No more boss to blame, for he was me. This was a massive shift in perspective!

I also became the mad scientist, creating the new products and coming up with new ways of approaching old problems.

And I do ALL of that here.

And the more of that that you have in place before coming to me, the greater the chance that you’ll achieve whatever goal it is that you’re pursuing.

I used to freelance.

Nothing wrong with that. But it did not meet my needs and it added problems I did not want.

Now I focus on finding and working with peers

Mike Romano is one of my peers. He knows it and I know it. And this awareness excites the hell out of both of us, as we work together toward making his dream into a tangible reality.