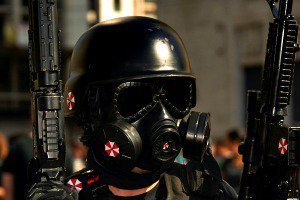 This was making itself known so I had to write about it. The following is one of the funniest (to me) and, simultaneously, darkest moments I’ve ever lived through, literally.

It is about 3 AM in Bahrain, a little island nation off the coast of Saudi Arabia, about 270 miles south of Kuwait. The Gulf War is currently under way.

This is the base from which about 100 war birds launch death and destruction into Iraq.

We are Target Number Three in priority on the Iraqi bombing list. Scuds tend to come our way every once in awhile.

Everyone in the 12-man tent is sound asleep.

We are violently awakened by a series of the loudest sounds I’ve ever heard in my life. There is no way to describe them.

If you have never been in a war, you simply have never had a chance to hear such a thing. There is nothing in civilian life that gets this loud.

We are trained to immediately don our gas masks at the sound of the alarm or for any reason we think it’s necessary.

That fucking alarm went off every time a Scud went up anywhere in the theater of war. Didn’t matter if it was coming at us or not, our alarm went off.

It went off constantly for weeks when nothing was going on in our area.

Not tonight when we actually need it. Just sonic booms.

The explosions sound to me as if they’re happening about 9 feet to my left and it sounds like they’re walking them in. They’re getting closer with each hit.

We had just cleaned the tent earlier that day and I mistakenly put my mask in its place upside down.

I managed to get my mask on backwards!

Any of you in the military can testify how about impossible of a thing this is to achieve. But I did it!

Insane levels of fear seem to propel one.

I almost tore off my ears and nose to do so.

At this point in time it was rumored that Saddam had chemical warheads and would use them. To my mind, a wave of lung burning, skin roasting mustard gas was probably already coming our way.

I SHIT MY PANTS when I realized my problem!! Tore off the mask, almost removing face parts again and got it on right. This took seconds. Then I was calm.

All the guys bugged out and headed to a nearby makeshift bunker to wait out the attack.

I didn’t want to go in the bunker. Looked too unstable to me. Figured if it caved in I’d suffocate. Screw that. I’d rather be blown to pieces instead.

I really didn’t know what to do. Not out of fear, but anything seemed pointless.

I could not see surviving what was currently going down and I waited for death calmly.

No fear. No bravado, just no fear. I was already dead in my mind.

I hear laughter. I look over and there is one of my best friends, Dale, sitting on his cot and cracking the fuck up.

Well, when Dale laughs, I laugh. Apparently, even during a missile attack. Soon we’re hysterical!

I ask Dale, “What the fuck are we laughing at?!”, while still laughing myself.

He answers, “We are DEAD. They fucking killed us! We’re fucked!” then continued to laugh himself.

“Yeah we are!” I said, then, “this sucks! I didn’t even get to SEE an Iraqi let alone kill one and now they fucked us. Fuckers!” and I kept laughing.

We were still laughing when some unknown jughead in a mask stuck his head in the tent and yelled, “Get to the bunker!”

“Fuck you! Get the fuck out of our tent!” we said and kept laughing.

“You guys are fucking crazy!” he yelled and he disappeared into the night.

Then it was over. We calmed down and got quiet.

Then I turned to Dale and said, “Shit, I guess we’re gonna live after all. Hell of a fuckin’ way to wake up huh?”

We learned later from some guys who’d been up and outside, that three Scuds appeared as bright dots on the horizon, and as soon as these guys even had the chance to see these lights, the Scuds were already over our heads.

There was a Patriot Missile battery right down the road from us.

Five of these things launched immediately, each breaking the sound barrier just yards from their launchers, and intercepted the Scuds right over our heads about a mile up.

I was glad to see how I would handle the end, at least if it came in that way. I was glad to know I didn’t get scared.

Again, no bravado, just calm acceptance of what we thought was the unavoidable finish.

I figured if I had to go, then I couldn’t do much better than to go with Dale. We were tighter than blood.

Did this plant something in my head that resurfaced later to give me grief; cause my bipolarism to gain a foothold?

I don’t consciously think so but who knows? The mind does as the mind will.

My book “It Takes Guts To Be Me: How An Ex Marine Beat Bipolarism” covers a good portion of my Marine years, as they played a massive part in me becoming all that I am today. Both good and bad. If this stuff interests you then click on the link below.

FYI, I have an unpublished second book with a third to follow, based on all my years in the Corps.

Highly skilled, criminally minded, party animals. That was my life while in.

Helping people defeat this bastard of a disease is my main “cause célèbre”. (I think that’s how it’s said.)

The photographer of this post’s featured photo: Fábio José Lima