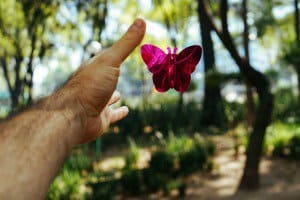 Knowing when to let go and learning when acceptance is OK are two of the greatest strengths you’ll need to develop, in order to succeed.

And they’re two of the hardest.

Letting go and accepting are two sides of the same coin

You do the one to get the other.

Here’s my best example of how this has applied to me as I’ve developed my online persona, as well as my path to success:

One of my biggest complaints for years was not knowing where “the crossover line” was.

Keep going or walk away?

The hardest thing in all of this has been tempering my will to win and developing the patience to see the current plan through to completion. These two states of mind have competed for dominance over my thoughts for much of my growth and learning curve. They’re ironic in their opposition to one another coupled with the fact that I could experience both, simultaneously.

How can you not know when to quit and quit too often, at the same time?

Not sure really, but I think the syndrome is a familiar one to many.

I sort of kept rearranging the individual pieces within my overall puzzle. It feels like progress but it’s actually draining and keeps you out of focus.

Not that it’s been a total loss. There’s something to be said for exposure and being well-rounded but again, that line. One can become over-exposed. It is imperative to know when that point’s been reached. Then you must be stopped.

Now, I stick to one plan but not out of stubbornness. I have accumulated a mass of experience as well as a mass of journal entries which, together, have led me to a grounded place in my mind and spirit. This type of grounding is something that can be taught.

It was brought to my attention many times in my travels but not in a way that caused me to feel secure about my powers of reasoning. I was handed the pieces, with emphasis on whatever that current mentor was trying to teach me. This led to an imbalance in action planning.

Allow me to help you avoid all of this

We can take a look, together, at what it is you want to do and sit it next to what it is that you do best, then match it up to the best online tools and tactics to create a success story for you.

The photographer of this post’s featured photo: Dan Gold