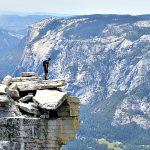 There comes a time when the fires have died down, all the horses have been returned to the barn, and the cleaning crew is sweeping the street. Party’s over. Main disaster averted.

Time to get back into the game

In order to grow and succeed, you’re going to have to constantly push the envelope. Your edge has to stay crisp. Your appetite for information has to be fed. You must continually test your abilities as a leader. You can’t hold still for long.

You’re either living or dying. There is no such thing as holding still

This fact was brought to my attention using the example of a tree. If you look at it, it appears to be doing nothing. Holding still. But that is not possible.

The tree is either growing or it is dying. The processes of life within the tree happen too slowly for our eyes to see but it’s doing one or the other. That tree is getting bigger and stronger or it is slowing down and dying.

We are the same. What this means is that once you’ve settled your last major issue and have returned some calm to your life, it’s time to find and tackle that next obstacle.

This may involve some risk

I’ll share something from my past that illustrates this vividly. I’d overcome a horrifying health disaster. The actual overcoming took about a year before I could safely say I’d beaten it.

I was getting better that whole time but I didn’t really believe the thing was dead in the water until a year from commencing my recovery. Then I kept improving over the next year.

Well, the fact that I’d even done it and was still alive was a miracle in anybody’s book.

So, now my family was pushing me to write about it. I ignored them for a bit but tripped across a company that could not only help me write the book but turn it into a business, as well. That interested me. It would cost $4500.

I had just survived the unsurvivable and repaired the unrepairable. I had come into some cash but was facing a mountain of debt. I paid off a big chunk of the debt and then took my remaining $4500, which I really needed to cover more of the debt, and mailed it to this company in Canada.

My hand was shaking as I dropped that envelope into the mailbox.

I had made rash money moves in the past. “Stupid” would be a better definition. This felt like it might possibly be the next in a long line of mistakes. I was terrified.

But I had no way of knowing that beforehand. I was taking a gamble. People were supporting me but they weren’t sure either. We all waited with bated breath for the process to begin. And it turned out more than OK.

That risk that I took is the one you may be facing now. Hopefully for you, it’s not that fraught with terror but maybe it is. And maybe that’s a good thing.

Terror has a way of forcing one to produce

It’s another accountability device and a burning bridge, rolled into one.

Be careful with this. You can go too far and get sideswiped by Shiny Object Syndrome. Or you can waste too much time in collecting info without ever acting. You have to go with your gut to a large degree but some professional guidance would be wise to consider as well.

Just don’t sit for too long. Ever. Because you’re not really sitting. You’re dying. Pondering is OK to a point. Info gathering and collating is necessary too. But then do something with it all as fast as you can and as soon as you’re able.