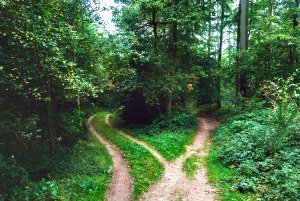 There will always be a moment when you don’t have what you need when you need it to keep the job moving forward.

You’ll have reached a fork in the road. One path has the answer. The other’s a dead end.

Being able to reach your destination (goal), regardless of your inability to see where each road leads, is going to take some crafty thinking on your part.

Because the mission requires you to keep moving, no matter what.

This is when you’re going to:

Sometimes you gotta wing it.

In the Marines, it was expected. It’s one-third of our motto.

In my job, it was a foregone conclusion that the necessity for winging it would always be present. What we did covered too much territory both in skill sets and scope.

Add to that the amount of people involved and that they were often speaking different languages than us, and the need to improvise became paramount.

Just too many variables to overcome, even with the best of planning. But we did plan well, so when an improvisatory moment would arrive, it was usually an isolated event with a simple fix. Not easy but simple.

This way of being prepared, no matter what, has served me well in the civilian afterlife. And it has become of prime use here on the Interwebs.

The ability to improvise is going to play a huge part in all you do as you develop your Internet presence. Many of you have no budget, so you have to make do with whatever’s on hand. And in the beginning, trust me, that’s enough.

On a brighter note, the ability to do much, free, is eternally on the rise. There are people out there with brains leaking out their ears they’re so smart, finding ways to make things easier and cost-free for us to keep marketing our messages.

You don’t have to invest nearly as much as was once necessary in order to be found and to exhibit a certain level of quality at the same time.

Because, make no mistake. You don’t have to of the highest caliber or be the most dazzling or technically awe inspiring, but you don’t want to be all the way on the bottom either.

People are coming to expect certain looks and functionalities on sites. They expect certain ways of being able to follow along with you or buy from you, even interact with you.

Keep track of how you travel the Web

Note what you like most about a site or a task you’re performing on a site and why.

What did that person or company do that made you pick them over another, or stay as long as you did, or take an action they asked of you? Then do your best to duplicate that on your site.

The world is your classroom and the lessons are free. You can learn much before you ever invest a cent with anyone, including me. Use what’s been freely handed to you and start getting your words out there.

The photographer of this post’s featured photo: Jens Lelie