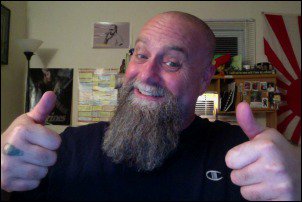 And the Old Me did NOT go gentle into that good night.

He fought to live and it was because he was scared.

When I look back on the past 15 years, I can spot the times when I didn’t think I had what it took to take my life to any kind of a higher level.

My way of succeeding was to always break personal records in whatever physical activities I was doing at the time.

I never really looked for new activities – reasons to stretch

There was nothing inherently wrong in this as much of it was necessary, fun and healthy.

And it helped shaped the guy you have before you now.

But overall, I was playing it safe and hiding my fears behind a wave of brutally won achievements.

I was all about my physical being, an area I was intimately familiar with.

An area I had been trained in the Marines and elsewhere to conquer, control, and force past all limitations.

It was easier to hurt myself than to heal myself

Taking and managing pain both focused my energies and released them.

And it kept my ego safe and sound by allowing it to only strive in this place where we both knew I could continually dominate and rule.

It was my version of what everybody does when they get stuck but don’t want to be.

But it was only temporary.

And it was working less and less

I can remember many nights in my twenties – high as a kite on weed and hallucinogens – looking up at the night sky with all its stars, and realizing they were more than just cool visual props for my ride.

They were starting to symbolize something that took me years to pinpoint.

They stood for “MORE”.

Over the next ten years, a battle raged within and without that led to dramatic changes in my life:

Then I crashed and burned. I was spent.

I’d come to realize that I needed a reboot. A system reset.

As I fought to survive, I knew a better version of Kenny needed some consideration.

So I began to research freaky areas of thought.

Stuff I’d normally felt was too soft for my liking or inapplicable to my needs and wants.

As I sought to do better and be better, I not only achieved it, I opened up a can of worms in the self growth area that I could never possibly hope to reseal.

I finally understood that I could be more and that it was totally doable! Not only that, it was necessary!

I gained faith in myself

Then, spurred on by everyone’s urgings around me, I wrote my first book. Then another.

And on and on.

I believed in myself

I believed what others told me about my potential.

And I found proof of people who seemed to be just like me, who’d gone on to become something greater than what they once were.

They seemed to have done the impossible.

I want to be the proof to you that you can also reach that next level of awesome that you feel boiling in your chest.

I want to show you how to get your thoughts out to the world, how to help those whom you care about most, and how to eventually earn a living from it all if that interests you.

Don’t be freaked. You can do this. I did.