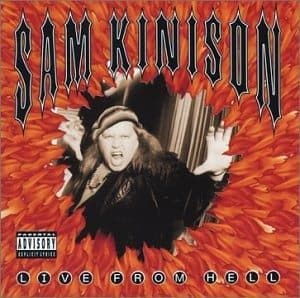 That’s a quote from a Sam Kinison album.

His savagery matched ours and I can’t even detail what that was in reference to. Not here.

But, much as I loved him, I only wanted to use that quote of his to prove a point.

Going after my version of success involves:

Nor do I wish to live a life where that drive is no longer needed.

I’ll get to that first great level of where I’d like to be.

Doesn’t even matter what that means to me in relation to you. Not exactly anyhow.

You just need to know that whatever you want to have, be, or do is possible to achieve

You just have to decide to go for it.

Then you pursue it like a mad dog until you have it.

In your heart, I mean. You gotta get ridiculous with how bad you want that goal to come true.

And it’s frequently coupled with:

A “Sense of Urgency”

This thing you want is not going to come your way if you don’t desperately desire it and wish for it to happen soon.

This is all relative.

Maybe you want something to occur that will take time to develop or for materials to accumulate. It may take years.

But act like every day you waste is a month added to the realization of your goals.

One caveat: Don’t drive yourself insane over this.

Just keep it crisp and fresh in your mind at all times.

And every now and then, walk away from it for a day or two to recharge your batteries.

But make it the number one priority in your head, every day.

Never let it get stale or foggy.

I got a buncha goals.

And once they’ve been achieved, there will be a resetting of how big I go next.

But I won’t see any of these things come true if I don’t go after what it is I care about most.

And much of what I want used to be met with stares of incredulity or nods of pleasant pity as the person I was speaking to disbelieved my ability to pull it all off.

That’s something that has always cracked me up.

People’s inability to think big being superimposed onto my dreams

I would tell of a grand plan, or share some part of my story that was supposedly impossible to do, yet I did it.

And the other person’s level of belief of such a thing was so low or nonexistent that they’d pity me for trying.

Or wouldn’t even believe that what I’d said happened, happened!

And that is why this site exists.

I know there are thousands of you out there who have experienced similar events.

You are afraid to share your longings publicly. You think maybe you’ve bitten off more than you can chew.

You feel foolish for not just being happy with what you already have, when you know it’s not a matter of being ungrateful.

(In fact, if you are not grateful for what you already have, you’ll never see these larger dreams come true.)

You just see more for yourself!

Small people keep themselves feeling safe in your presence by attempting to keep you feeling small and foolish for even thinking the way you do.

This is called “The Crab Bucket Syndrome.”

Whenever one crab in the bucket tries to escape, another will catch its leg and pull it back in. It’s just what they do.

People are no different. Sadly.

You need to wisely proceed with activating that plan and you need to protect yourself from your own overzealousness at times.

Folks like us can really be our own worst enemies.

But you can’t not try!

And the more anyone ever told me how crazy I was or foolish, or unreasonable, or clueless the harder I went after that very thing.

Sometimes, the other guy may prove to have been right.

People like us really can go off half cocked and chase sparkly objects without critical consideration of certain realities.

But as long as we don’t quit, we are eventually going to hit on a winner.

The trick is to get all those previous mistakes I mentioned done and over as quick as possible, in order to reach that first major victory.

And this site, packed with my experiences, contacts, and lessons, is one way you can short circuit that learning curve.

It’s where we harness passion, install plans, instill confidence, and work together as a team to profit, help others, and have fun on a scale most only dream about or fear too much to even attempt.

You can do this. Whatever it is.