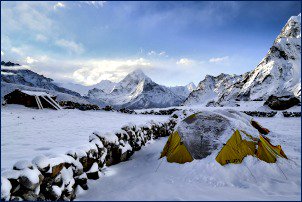 Bear with me on this one. Learning how to survive created some interesting tales for me. But they’ll apply to you in the end.

In boot camp, the drill instructors tortured us for no apparent reason just about constantly. One of their favorites was to march us around in the grass, right at sun up or sun down.

This would stir up the maximum concentration of sand fleas, these nasty little no-see-ums that live in South Carolina. Their bite creates an incredible itch and we’d be brought to attention and allow the bugs to feast on us.

They’d go in our ears up to our eardrums. They’d go into our sinus cavities up into the core of our skulls. I can’t do justice to the insanity of that itch in words. As soon as one of the seventy-two of us would scratch or break attention in any way, the clock would start again, the goal being five minutes of uninterrupted standing at attention.

We were in the grass almost 45 minutes one evening. My hands looked like mittens they were so inflamed. Blood was leaking out of my ears and down my hands. I wanted to dig in my head with a knife the itch was so bad.

Some time later, we were given a chance to ask any question of our senior DI without fear of retribution, so we asked about the sand flea torture. Long story short, if we were hiding from the enemy and covered in poisonous bugs (the Marines do a lot of jungle fighting) would we scratch?

So, withstanding that torture readied us for the battlefield, as did all our training while on the Island

This ability has carried into all parts of my life since. But the physical threats are almost negligible these days. It’s all mental.

I have had to force myself to work for days straight in order to do some of the things I’ve done online. (Don’t worry. I know better now and have different plans for you when we work together.)

I have endured multiple stresses of all kinds as I learned my way around the Internet and a computer. I gave up large chunks of my life to make it to this point, choosing to make a priority out of my learning, just as any college student would.

My health as suffered as I’ve foregone gym time in exchange for learning time.

And now I have strategies that make much of this way of working online unnecessary. But there are still times when a big push must be made in order to meet deadlines. And I push.

I often want to stop, to go to bed, to put off some of the work until the next day. But those things all keep any major project from ever seeing completion.

So I keep going. I don’t scratch.

And I’m still alive and still making headway. I have learned how to survive myself and the sacrifices necessary to pursue my goals.

Would you like to know what I’ve learned up to this point so that you may shortcut this rather brutal learning curve?

Are you willing to do what it takes to get your project off the ground or take it to the next level without scratching? Because some suffering will be required. Any online personality who tells you different is lying and just after your wallet. Some of this is going to hurt.

If you want it bad enough, you’ll do it. Like anything. But you’ll do it faster and get to scratch quicker if someone who’s gone before you is guiding you along your way.

The photographer of this post’s featured photo: Wolfgang Lutz