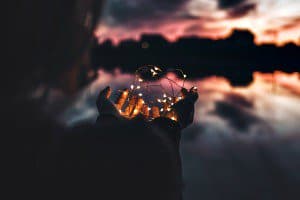 Some of you guys got me to thinkin’ about the potential good in having bipolar.

Well, there’s no good in having it.

But for some of us, the fact that it is there means that we may have attributes that put us ahead of the rest of the crowd in some ways.

If you do some looking around you’ll see that many artists, musicians, actors, business owners, empire builders and scientists were and are known to be bipolar.

Apparently, it helps to be a little bit nuts to be able to think outside the box.

Our brains are literally wired different than the rest of the population.

This is true of all bipolar folks. We have a totally different take on things.

But not all bipolar people have this creative streak.

However, it is a key issue in those of us who do.

In my own experience, I can look back and see it was why holding a job was completely impossible for me, even though I was good at whatever I was doing for that month.

I had over thirty jobs. Why? I kept searching for the job that would bring me joy in doing it and the paycheck I needed to get the kind of life I both wanted and needed.

I learned through extensively painful trial and error that this mythical beast did not exist.

I was never happy in any job I did, except for one.

I had good times and a lot of laughs wherever I worked. I made friends easily. If I was part of the staff, I led others easily.

But dissatisfaction would always appear in relatively short time. Many times it was immediate.

The one job I enjoyed?

Being a security guard in the Emergency Room and the Psych Lockdown Ward in a very dangerous city hospital.

I was literally hired for my size and strength, Marine background, and lack of fear.

I was paid to clean house.

My bipolar worsened severely while at this job, and I was allowed to take out my frustrations on the violent people I often encountered in an evening.

Nobody cared because the type of people I usually handled had no problem with trying their best to maim or kill any within their reach.

The longer I held that job, the better I got at it and the less I called for back up in a fight.

I took on any size, any mental aberration, any number of bad guys at once with no help. And I never lost a fight in the two years I did this!

I loved what I did but it was turning me into some kind of vicious creature.

I so loved fighting and I looked for it wherever I went. It burned me up over time.

So where did all this anger come from?

It took me decades to realize the thing I hated most about being an employee was that it stifled my ability to be me.

It’s been that way since my first job back when I was 14.

That’s how I saw it. Too stifling, not enough pay. Ever.

I developed attitudes that allowed me to survive at jobs and this sometimes equated to me being quite the psycho.

I was either the erratic yet amusing coworker who’d always get the laugh or the dangerous, quiet guy you’d do well to leave alone and just let him do his thing.

Either way was not my true self, just a defense reaction to a shit life as I saw it.

It was hellish for me and others like me in the Marines.

Being a Marine was no sweat for us.

We were great at our jobs, young, in fantastic physical condition, and had no problem with the thought of slaughtering the enemy or risking our lives in a war zone.

But good Lord, don’t bore us!

The day to day routine of life in the Marines was too boring.

Put on top of that the ever present awareness of just how much time was left on our contracts and you now had a jail sentence.

Everyone I knew lived for that day when our EAS (End of Active Service) was up.

The friends I had in the service were all big thinkers, warped thinkers, college backgrounds, and highly entertaining people to be around.

That’s the creativity I’m talking about.

People who have this trait are meant for something special.

If this is you, bipolar and creative, you’ve probably run amok with the manic side of the illness and your creativity has morphed many times into unregulated madness.

This is all very good and worth doing if you can get yourself under control; get your symptoms calmed down in a way that won’t compromise your creativity.

But this is a tricky area.

You may view yourself as an overachiever who is misunderstood by all around you.

But if your methods are destroying your life, hurting those close to you, and causing you to invest unwisely with both your money and time, take notice.

You’re on to something but you need guidance and a calm mind to properly bring it to fruition.

The photographer of this post’s featured photo: Naletu