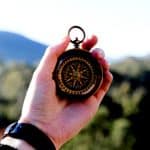 I’ve changed professions almost more times than I can count. (I can count ’em actually. 40 times.)

I’ve never met anyone in my day-to-day life who’s changed jobs as much as I, or been exposed to as many different and sometimes highly unique life situations as I have.

I’m usually the one with the best stories and in more than one area. But I am not bragging. It’s the default condition of my being.

When I was growing up, and well into my twenties, I was constantly hiking and camping. The urge to see what’s over the next rise was always something I could not ignore.

When I was very young, I used to sit on a hill, watching traffic on the New York State Thruway and wonder where all those people were going. What did they do?

In my twenties, I lived out west for a few years. I had jobs that kept me traveling the entire state of Colorado and the perimeter states.

Even then, as I was driving to a job, I’d see all the people in cars, who clearly were not headed to work, and wonder where they were going and what they did for a living that enabled them to be going there on a weekday, during work hours.

How did they escape the rat race?

I could never let go of that thought. Not for years. It was an irritating itch that began to turn into a festering wound inside my mind.

And I am grateful for that fact. It led me to here and here is infinitely better than there. But I didn’t get here right away. I tried many more jobs over the next few years.

I didn’t stick to any one field either. I had a handful of factory jobs. Those were similar. But I had construction jobs, did security, bounced, did office work, cleaned, moved furniture, sold water filtration systems, sold cars, became a public speaker, learned web design, marketing, video tech, did merchandising, was a hazardous waste cleanup man…the list goes on.

I honestly can’t remember them all anymore. I used to keep count but once it got around 35, I stopped caring. (2014 update: It eventually reached 40!)

In the middle of them all, I had a handful of repair and tech jobs. These jobs in particular, did more to both ruin me and build me up, at the same time, than anything else I ever did.

Nothing was ever the same in a day. It was both exciting and frustrating. I liked the fact that my day wasn’t routine but I did not like the fact that this meant I was usually facing a situation that was new to me and I was at a loss.

I hated not knowing what I was doing. But I’d always find the solution. Always. These jobs taught me tenacity in the face of despair and every negative mindset brought on by the feeling of helplessness and frustration.

They taught me to keep going and that I was capable of anything put before me.

So, all these jobs were helping me to discover what it was that I really wanted out of life

I was searching. And I was coming up empty handed, for the most part. Only in retrospect, can I see that I was in the longest running class of my life. The class of Self Discovery.

I didn’t feel I was getting any closer to having the life I wanted, affording the things I needed and deserved for both me and my family, or simply feeling excited to wake up and face the day.

But all these jobs helped shape me into what you’re seeing now. They threw the answer in my face at every turn. It just took me awhile to readjust my perspectives well enough to see it for what it was.

They exposed me to an incredibly diverse range of people!

And I enjoyed telling my stories to every one. I enjoyed learning from the interesting ones. I appreciated what others taught me, even if it took me years to realize the value in the lessons.

I have counseled many for years. I have helped more people out of more jams due to my vast experience in seemingly everything. I became an adept researcher. If I don’t have the answer I know how to go find it, where it may be, who to call.

Once I have answers, I know how to string all the pieces together in order to help someone get ahead

And that, right there, is what my higher purpose became. For so many years I wanted to simply earn a lot of money and have what I wanted to have.

I realized I didn’t like where the world was headed and that others agreed with me. I realized I wanted to do something more than complain, more than sign petitions or rant on forums.

I wanted to enact change, not be a hypocrite

I’ve also became more intensely proactive later in life. I never could stand waiting for someone else to deliver me my answer or my help. But I only applied this attitude to my own needs.

As I got older, I found myself unable to NOT offer my drive, research skills, networking, and planning capabilities to anyone who needed them.

This sort of kicked off a new level of push and I began to strain against the chains to find more, faster and do more with it once I had it all. Then I began to look for partners.

And I LOVE it when I find another, like myself

I started building a team of people who were like me. The lineup has undergone many changes. Projects have come and gone. Some people fade back only to return much later and we explode into some new awesome endeavor together and it’s very exciting!

And that’s important. It’s one thing to enjoy being this way but another when you realize you still need help and you have to go find partners, friends, and associates.

You have to go out and make connections

You can’t be a storm of one, trapped in your own bottle. You’ll never accomplish anything great. So, I went looking for my tribe. And the act of doing so expanded the scope of the adventure even more!

Now, I enjoy waking up and facing the tasks required to build my business larger and to expand my reach. I enjoy meeting the kinds of people I meet in the process of extending my reach, fixing my own problems, and developing new relationships for all kinds of reasons.

Don’t get me wrong. It’s often hard, often involves lack of sleep, and often is not fun. Plus, life has an annoying tendency of getting in the way of the rest of my empire building plans.

But my higher purpose, to make a difference in this world and to leave a legacy for my son, drives me ever onward

That’s a key point. This purpose has not so much to do with you, even though you’re trying to find your happiness, as it does with applying all your strengths toward helping another.

In your pursuit of happiness, you’ll find it is only to be gained by helping some other person find THEIR happiness.

You have to dig into your own heart and mind and find what it is that would make you wake up with fire in your belly.

You need a reason to exist beyond getting paid. You need to be honest with yourself about the direction your life’s headed. You don’t have to save the world. You can work on a very small, very local level if you’d prefer.

But take the focus off yourself and aim it at another, and see what happens.

How well do you spend your time and are you truly getting the most use for it that you possible can?

You need to become acutely aware of the fact that your number one resource, time, is a finite device and will run out, possibly in the next second or two. You don’t know. In the face of that, how well are you utilizing this resource?

On the flip side, discover what it is that does fuel your engine, tackle it head on, and you’ll never be worried about time. You’ll be having too much fun inventing, developing, enacting, planning, and helping to see how much time has gone past.

But unlike before this discovery, you’ll have a track record and proof of your efforts – a legacy – that will always be there for your study and will always be there to prove that you did something great with your life. Something that made your friends and family or whoever means the most to you, proud.

You’ll have done more than just repeatedly show up to “Make the Donuts”.