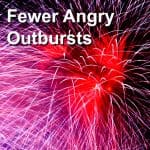 We discussed defusing an angry temper in another article. But what about the “always exploding” walking time bombs amongst us?

When it comes to temper, the angry outbursts are the tip of the spear.

They are the weapon of choice for those who know of no better way to solve their problems.

There is a dark irony to the explosive personality. Many of those who have it are frequently very scary individuals.

Yet these same individuals may have become this way due to fear!

They’re afraid! Sometimes it’s a flat out fear of something and other times it’s a more pervasive and underlying fear of the way their lives are going. It’s a fear based in a lack of control.

This is somehow a dirtier, less glamorous sort of fear because it works like a cancer. It’s not something easily identified and removed. (Although we’ll help you do that very thing.)

Also interesting is many angry people got this way for a reason that no longer exists but they no longer know how to get through a day without this behavior.

They might just think that they’re “tough”, “all business”, “direct”, or “no bullshitters” – folks who “tell it like it is” but in the form of a screaming, hollering firestorm of expletives, violent body language and throbbing veins in foreheads.

And once there, they could even be aware of the fact that this just is no way to be when running a life. And they may realize they are running their life into the ground.

The frustration this causes can potentially worsen the occurrence of angry outbursts. Speed up the frequency and lengthen the duration of these events. How’s that for a twisted Catch-22?

People like this are an acute version of the bad tempered people we spoke of earlier. They have a black belt in Rage. And our method of helping them to find their calm, their Zen, if you will, is exactly the same.

NSA and Reorganizational Healing both provide a way out of this storm.

There are aspects of your past hidden within you of which you may be unaware that are driving much, if not all, of this rage

We’ll help you find these pockets of psychic pain, connect to them, and use their ferocious energy for the greater good of healing your soul, once and for all.

We use dramatic wording to prove our points. Don’t get too hung up on any particular way we state our case.

If you feel you don’t have a soul, we’re going to help you fix yourself all the same. We don’t care about that stuff. There is no religious aspect to any of this.

If you’re a good Christian, Muslim, or Jew, you’ll only become a better one as we progress.

If you’re an Atheist and think rational minds should prevail in these areas, you’ll become a better Atheist, more able to see how to live your life in the same vein of thought you had before seeing us.

But the garbage that we as humans have inflicted on each other? The self-inflicted traumas? The junk we store within ourselves as accumulated psychic and physical dings and dents? Well, we’re going to debug you of that crap just as soon as possible.

We don’t want to change your mind. We want you to more efficiently use the mind you have

As captain of your own ship, we want you to make better decisions regarding your ship’s course. You’ll come to know why you are like you are and you’ll discern whether or not continuing on the same path that you were on when you began with us is still the one you wish to keep treading.

YOU will decide if you should remain the same YOU that you were before we began giving you care. That’s one of the beautiful facets to our type of healing. You can only improve. You’ll do so under your own power and the ways this happens will come from you!

YOU are in charge of all of this. We’re just the guides and the interpreters of certain things. You will make of it what you will as we go but we’re telling you, you’re going to feel better the longer you work with us!

Return to “Emotional and Psychological Well Being and NSA“