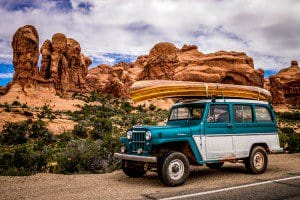 Driving a vehicle as a bipolar person is quite the adventure! There are so many ways in which to malfunction during driving, as to be considered ludicrous.

There’s not really much to say. Like any other repetitive skill Joe just drives where he wants, hardly applying any conscious thought to it at all.

Outside of maybe some road rage, searching for a parking spot or an address, there is not a whole lot that Joe is actively considering as he drives.

Now let’s look at how a bipolar person might be viewing his or her driving experience.

As always, I’ll use myself and my past as examples.

That can hit at any time but there can be clear triggers and there are many.

Crossing a bridge with all that air and long drop underneath sometimes presented a problem for me.

This was not so most of my life, only when I became solidly bipolar. It took great courage on my part to make it across without completely freaking out.

I’ve known some people who couldn’t do it. They’d pull over before the bridge and just stew in their fear, unable to go forward.

I liked to employ the mad dash approach and luckily, I always made it across.

The wide open road can do the same

There’s just too damn much ROOM man! Too much to ponder. No sense of security.

I sometimes would feel as if my essence of self just wanted to escape in all directions; meaning I could not contain my personage.

The pending escape would be the deflation of self. I would no longer exist.

I wouldn’t consciously be thinking this. It was just a feeling that only later could I put into words.

The road seems to be coming at you too fast and too close.

I would dwell on the fact that only inches separated me from the asphalt that would rip me apart if something were to happen to the car.

Or I would be about to hit someone who somehow was suddenly right in front of me.

Also, the angles of the road would feel wrong

I couldn’t effectively foresee where the road was headed.

This would become horrifying. Every turn in the road became an instantaneous life or death decision making event.

The pitch of the pavement would seem off balance and unable to keep momentum from shooting me straight into the median.

I would feel very unsafe at these times, not sure what was holding me to the road.

My little bubble of personal space, to include the car itself, suddenly would feel incredibly tiny, hampering my ability to drive or even breathe.

The walls were closing in.

Somehow, the road and surrounding landscape would take on the feel of a confined space.

Or just the traffic around me would do it. Very freaking bizarre sensation to deal with!

The fact that I was controlling a thousand plus pounds of speeding metal with any number of factors affecting the thing staying where I wanted it, would become too much to contemplate.

Or the intricacies of the hand/foot/eye coordination would no longer flow. I would dissect each area as I was using it and would lose the concert effect necessary to drive without thinking.

OK. Many people can experience this but when I was sick, my violence level and accessibility to rage were huge and instantaneous.

Whenever someone slighted me in traffic, I would pray that they would want to pull over to argue about who was right or wrong.

I’d see the whole thing in my head before anything had even happened.

Matter of fact, now that I understand that this very thing happens to people, I don’t think I’d care to ever pull over and argue if I was the offending party.

I don’t feel rage like that anymore but thinking practically, I was always a hands-on person. Too many others carry guns. No one’s bulletproof.

I mean no offense to any law officers out there but the sighting of a cop in my rear view would set my heart to hammering as if I’d done something wrong.

This was probably based in a life packed with actual wrongdoings but when I was bipolar it was amplified.

And if I actually got pulled over for some infraction, the stress and anger that would descend was immense. I couldn’t stop it.

My eyes felt like they were going to pop out of my head from all the rage pushing from the inside.

I hated authority and felt I should be allowed to fight about it, man to man.

I never mishandled the few times I actually was pulled over but in retrospect, I don’t know how.

I would consider what would happen if I veered into an oncoming vehicle or just took a sharp turn into a structure.

This is not the same as suicidal thoughts. The purpose was not to die and end all the pain, more one of scientific curiosity.

“I wonder what that would feel or look like?”

I would simply consider some psychotic move like that and then have to forcefully tear my thoughts away from it and refocus on correct thinking. Crazy, huh?

Confusion and total overwhelm just getting into the car

The anticipation of any of the above items was too much. I wouldn’t even get in.

I’d have to walk around a while or smoke a cigarette before being able to do it.

When my illness was in full swing, I didn’t even drive for about a year. Too hard to even consider.

So if you’re not bipolar, be careful out there because these are some of the things the guy next to you on the road may be dealing with.

If you are bipolar this can all be a thing of your past, same as me.

The photographer of this post’s featured photo: Quinn Nietfeld