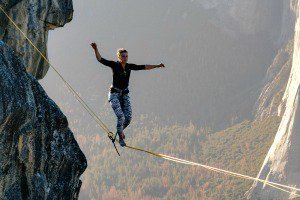 Courage. You’re gonna need a bunch of it as you press on into greatness.

It’s so painfully true that anything worth having is worth fighting for. And you WILL have to fight for your victories!

But really, like The Donald taught me, if you’re gonna be doing anything at all, might as well go big.

Courage is defined by Mr. Webster as:

The mental or moral strength to venture, persevere, and withstand danger, fear, or difficulty.

Its synonyms with explanations are:

Courage implies firmness of mind and will in the face of danger or extreme difficulty (the courage to support unpopular causes).

Mettle suggests an ingrained capacity for meeting strain or difficulty with fortitude and resilience (a challenge that will test your mettle).

Spirit also suggests a quality of temperament enabling one to hold one’s own or keep up one’s morale when opposed or threatened (her spirit was unbroken by failure).

Tenacity adds to resolution implications of stubborn persistence and unwillingness to admit defeat (held to their beliefs with great tenacity).

As far as I’m concerned, that damn near is the definition of what being a Marine is all about

Marines are thought to be fearless by many and it is many times true. But to have courage, to be courageous, often means to be riddled with fear and still doing what needs to be done. Acting in spite of fear, not in denial of it.

Now, as a Marine, I needed courage in many different ways over the five years that I served. I only faced my death a handful of times due to my service and quite a few more than that in my off time, as I was an adventurous soul.

But courage played an even bigger part in my ability to just keep showing up and doing the job. I have always been a DaVinci type personality. What most called fun, I called boring. What most considered too intense, I called enjoyable.

My measurement of “normal” was, and still is at a higher place on the scale than most around me

So, to just do my job every day as a Marine bored me to the point of sickness. Except when a big move was on and all my senses and cognitive abilities needed to be functioning at 100%, with no let up in sight. Then I felt great!

But relax. That’s me. There’s a strong chance that that’s you too, or you wouldn’t be on my site. But there’s no need to be a Marine to exhibit any sort of courage. You probably exhibit it in many ways as you deal with getting your message, product, cause, or service out into the world while trying to live the rest of your life, just as I have.

Whatever. We all fall into that list somewhere. And you’re going to need to keep driving onward despite all that.

The courage you’ll need to have or develop as you begin your online journey will take many forms. I only want you to get ready for it, look forward to creating and maintaining it, and accept that it’s an unavoidable fact that you’re gonna need it in order to achieve whatever it is that brought you my way.

There is a built in tedium to all this, not to mention a healthy portion of frustration

There is also a lack of time, energy, and resources for many who have an idea to physically develop it, start building an online presence, and getting the world to know about it.

To hang your hat on a dream and to draw attention to yourself online from the entire world is enough to put plenty of fear into any man or woman who’s not already familiar with it.

I was there once. I wanted to do this whole thing from behind the keyboard. I still do and you can too, but there will definitely be times when you have to be the face of your organization, go meet other leaders, or be on the phone with people striking deals that may hold your entire future in their outcome.

Don’t sweat that stuff. Who knows what of that might even come your way? And depending on the scope of what you hope to achieve, much of this just might not even matter.

But how cool would it be if you geared yourself up for it anyway, and in doing so, drew a much greater triumph your way just because the world thought you deserved it?

Rise up to this challenge and be ready to conquer giants and see what happens next.

None of what I do now looked like this back when I first started and I was plenty scared. No more. This can be you, too.

The photographer of this post’s featured photo: Leio McLaren