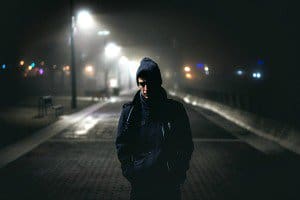 Bipolar is not a stand alone problem in its own right. A lot of factors go into its eventual arrival in your life.

Because of this fact, treating your bipolar disorder solely with medication and calling it a day is to miss the larger point.

You’re managing it, which is good, but you’re not fully addressing the root causes.

There are too many of these causes to list in one sitting so let’s just focus on one of the more ethereal ones for now. I’ll use my own experiences as examples:

As a boy, the main authority figure in my life routinely beat me, screamed at me, punished me, threatened me and basically argued with me over anything and everything in a day. I pretty much endured my childhood.

I was already an outcast within my peer group, kids my age. I didn’t see life like the rest of them and that made me the odd man out, a target.

Having the kind of home life that I did weakened me in my ability to handle the trials of youth. There was no parental support for me when the chips were down. I felt isolated and alone much of the time.

The more vicious kids could sense my weakness and I got tormented quite mercilessly at times. This all led to a severe deficit of self confidence as I grew. I felt tossed about like a leaf in the wind.

Fast forward to my teen years and early twenties. I joined the Marines.

Now warrior training and the backing of a strong team gave me much of the confidence I’d been lacking.

But I still felt at a loss because I was contract bound to do what I was told, whether I liked it or not, for the next five years.

I was strong but not in control of my life. This made me feel weak all over again.

I chose to deal with this lack of control by drinking heavily and later, incorporating street drugs into the mix.

I also threw in a new component. I acted tougher and meaner than I felt. I showed no weakness, and more so, I projected anger and menace whenever I felt it was needed.

This began as an act to keep me safe against the world.

But over time, I actually became this vicious, angry person. I was living the role.

This gets deeper. A part of me wanted to continue on in this vein, thereby solidifying my strength.

But the better part of me knew two things:

Thus began a major root cause of my bipolar disorder. This back and forth war in my mind over how to act was tearing my soul apart.

It was making me sick, mentally ill. But at the time, I could not see what is so clear to me now. I only knew I was losing my mind.

I went on in life for another couple of decades, fighting this fight in which I was the enemy on both sides of the issue.

I was in a raging battle against myself! And I didn’t even know it!

I switched street drugs, I threw myself into dangerous activities of all kinds, I took major unnecessary risks, and I pushed myself in physical ways as hard as possible whenever I could.

Much of this was fun and exciting but in a larger sense, it was really nothing more than a deflection on my part.

I was keeping busy so I wouldn’t have to face the true underlying problems I’d developed.

As my bipolar became official, I was indoctrinated into the wonderful world of pharmacology.

At this point I was so desperate, I went willingly. I ate every drug available for my condition and in truckload amounts.

I only got worse with time.

And all the medication only added to my woes.

It was making me even sicker in ways that had nothing to do with my bipolar.

Eventually, I developed my own system, through a massive trial and error approach, and I regained control of my mind. I got my health back.

As I learned how to get well again, I discovered this whole Jekyll and Hyde war that had been percolating just beneath the surface of my conscious.

Once I recognized it, I could see how far back it had been a part of my life, how it had decided my every move and usually for the worse.

And now that the enemy had been revealed, I could attack it.

I fought to be a better person. I fought to learn how to aim my life where I wanted it to go and what that even should be.

Once this part of my plan came alive, my symptoms began to melt away even faster than they already were.

It is crucial that you learn what it is that is really driving you or how you may be pursuing the wrong goals in life.

You are probably playing a gigantic part in keeping your illness alive.

You can rob it of a lot of its strength if you learn how to look within yourself, deeper than ever before, then act accordingly.

The photographer of this post’s featured photo: Warren Wong