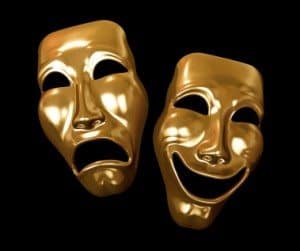 Bipolar 2 is a little easier to bear, but only if you’ve already experienced Type 1.

For me, this meant I got to enjoy its lighter assault only in retrospect.

I experienced Type II in the early stages of my illness

When I was first diagnosed I was highly irritable and had mood swings but felt more bad than good.

I had high energy and was the one who’d instigate the most adventure in a day on a job site, but I hadn’t yet enjoyed full blown mania.

I mostly felt bad and stressed. Angry. Edging toward violence more often than not but not yet employing it to any great degree.

I had less fear than most around me and was willing to take big risks, as far as others saw it.

To me, I had a higher level of abilities and calculatory prowess when planning something that might injure me or get me arrested.

That’s the long way of saying I knew my limitations, so I wasn’t risking anything as I saw it

I knew what I could do or get away with, even when I was aware of how insanely out of the norm my pending action was about to be.

But my depressions were causing me problems.

Interrupting my marriage flow. Causing me to mingle with others less and less. Finding less ways to be happy. Not seeing the point in trying. Not getting joy from what used to be extremely satisfying.

Getting very pissed off.


Acting out as a way to offset this irritableness. Becoming more and more unpredictable. Even to myself.

And creeping slowly toward eventual Type 1:

When regular hospital trips started happening.
When cops seemed to be a regular part of my life.
When the pharmaceutical servings were bigger than my meal portions.

But yeah, in the early stages I was classic bipolar and it was in the bipolar 2 arena.

Things were going very wrong but I still had it in me to function, work, think, have sex, work out at the gym, balance my books, and not kill anyone or think constantly how I might kill someone as I would later in the life, as the illness got stronger.

Here is what the National Institute of Mental Health has to say about it. Just look for “How does bipolar disorder affect someone over time?”

Bipolar II Disorder is defined by a pattern of depressive episodes shifting back and forth with hypomanic episodes, but no full-blown manic or mixed episodes.”

As you can see, in comparison to Type I, Bipolar 2 has a lot less impact. But make no mistake, it is a terrible land to inhabit. It is what first got me to the doctor’s office.

It was scaring me and I knew I was very close to doing bad things to people if I didn’t somehow turn it around.