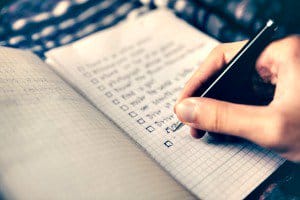 Finding some method of being held accountable is the only realistic way of succeeding at any venture, whether money’s involved or not.

If the average person has no one to answer to, they will never perform up to their highest capacity.

And even when they do it will not be consistent nor for any great length of time.

Another device that accomplishes the same end is a deadline. If the work’s not done by the agreed upon time, you’re toast in some fashion.

There is a psychological perspective that states,

Any task will grow to fill the time given to complete it.

The task might have been possible to complete in a shorter amount of time. The person just didn’t bother to get serious until probably the last day or so, or what have you.

This is why deadlines work so well

Given a week, most will blow off the first 4 days or 5. But those last 2 or 1, or the night of the last day, they will perform heroically in order to accomplish that task.

They could’ve performed heroically at any time during that week and taken the rest of the week off. That ability was always present.

But a stimulus or incentive had to be placed into the mix to set it off; to bring it out.

If you have a partner, he or she relies on you to hold up your end

Getting a partner turned my business life around. I have always worked hard but I more than tripled my output when I became a partnership.

I don’t ever want to let my partner down. He feels the same way.

We both know this about each other and it drives us to work even harder than if we only thought about our end in the deal.

It’s a mutual accountability. I know he’s out there, right now, losing sleep as I am and I must honor that by replying in kind.

Even he and I take occasional nights off for endless TV, family gatherings, dinners, and chores.

I mean, the rest of life still happens.

But when it comes time to work we have to answer to each other and neither of us is the type of person to let another man down. We drive hard.

It almost sucks being this way. We have no out. We have to meet our own standards at all times and it’s often not pleasant.

That’s just us, though. You might be able to accomplish what you need without slaving as hard.

If you have a mentor guiding you, you will not want to let that person down

They are probably paid by you but that’s of no consequence.

Their job is to keep you honest. Keep you working and progressing toward your goals. Not enabling you to give a partial effort much of the time.

Even if you just wish to be free to do what you want and live a simple life, you must be willing to answer to another so that you can have that dream.

It’s in our nature to slack off when no one’s looking. Very few have what it takes to keep pursuing excellence without some sort of shoving from behind.

And notice, I said, “shoving from behind.” Know why? Because, for many people, a reward is not even enough to keep them performing top notch. They have to be shoved.

Maybe it’s just the look in your kids’ eyes, or your wife’s or husband’s.

You know the look

That look that says you’ve let us down yet one more time.

You don’t ever want that look again. Let that be your accountability device. Let them be who you answer to.

A good mentor will instill this accountability within you.

All you have to do is stay focused on your tasks and to-do lists and constantly judge the ways you spend your time.

If you have a deadline and you’re doing something other than working on the project that deadline is for, then you’re not staying accountable.

Stop that activity if it’s not important, and get back to work!

You stick with a plan of this nature and before you know it, you’ll be working less hours.

The photographer of this post’s featured photo: Glenn Carstens-Peters