Anxiety Symptoms Vary But The Colossal Fear They Cause Never Does 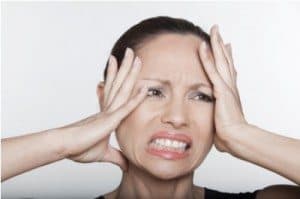 Anxiety symptoms are an integral part of the bipolar person’s world. The frequency, strength, and duration may change but it is all an incredible burden to bear.

Anyone experiencing any of this, to whatever degree, would want it to end and might go to extreme lengths to do so.

Supporters of such a person may not understand the terrible power these anxiety symptoms possess. Imagine an entire tractor trailer being forced down your throat in two seconds and you’re beginning to get the idea.

These fears can be beyond large. They can drive a person insane or to suicide. At the very least, they incapacitate and make a person useless to themselves and others who depend upon them.

Here is an excerpt from the National Institute of Mental Health (NIMH) website describing panic disorder, the ultimate combination of anxiety symptoms:

Panic disorder is a real illness that can be successfully treated. It is characterized by sudden attacks of terror, usually accompanied by a pounding heart, sweatiness, weakness, faintness, or dizziness.

During these attacks, people with panic disorder may flush or feel chilled; their hands may tingle or feel numb; and they may experience nausea, chest pain, or smothering sensations. Panic attacks usually produce a sense of unreality, a fear of impending doom, or a fear of losing control.

A fear of one’s own unexplained physical symptoms is also a symptom of panic disorder. People having panic attacks sometimes believe they are having heart attacks, losing their minds, or on the verge of death. They can’t predict when or where an attack will occur, and between episodes many worry intensely and dread the next attack.

Panic attacks can occur at any time, even during sleep. An attack usually peaks within 10 minutes, but some symptoms may last much longer.

The horror of these anxiety symptoms, at least in my personal experience, is that they can sometimes last for hours. I haven’t read much about others experiencing this as I did.

All of what you’re about to read, as well as all of the above, could hit me at a sustained rate of high intensity for two to three hours straight.

I used to pace the room, taking it, with the phone in my hand, about to punch 911, just wondering if they’d get there before my heart exploded. Here is my description of the symptoms:

The good news (and there IS good news, believe it or not) is that these experiences are signals of not so obvious, yet fixable problems. That does not mean a fix is easy, guaranteed, or doable at the moment but the potential to end all of this is great.

These messages from your body to your mind or your subconscious to your conscious are really just that; messages.

Understandably, they are a dangerous brand of communication but if enough tools are aligned to help a person understand the true nature of these anxiety symptoms, the healing can begin.